Brexit: The UK requires the UKCA or UKNI mark for the circulation of goods

There are different rules for goods circulating in Northern Ireland where it is necessary to refer to the Protocol Ireland / Northern Ireland of the Withdrawal Agreement and, in any case, a check must be carried out for each asset in order to identify the relevant rules.

Starting from 1st January 2021, with Brexit and the definitive exit of the United Kingdom from the EU, the rules relating to the marking of products have also changed, which now, in order to circulate in the United Kingdom, must comply with British legislation and, if required, carry the UKCA (United Kingdom Conformity Assessed) marking, which replaces the CE mark and certifies compliance and the correct completion of the procedures for the assessment of conformity according to the legislation across the Channel.

The CE mark will no longer be recognized in the UK and, conversely, the UKCA mark will not be recognized in the EU.
Also in this respect, there are significant differences between England, Wales, and Scotland, on the one hand, and Northern Ireland, on the other, where the CE mark will still be recognized and, in some cases, the UKNI mark may be applied for. to be affixed together with the CE mark.
The British Government, on its website, has provided some details regarding the timing for the adaptation to the new legislation and, with the aim of facilitating the transition, it is permitted, in some cases and subject to certain conditions, to use the CE mark until 31 December 2021.

Starting from 1st January 2022, all goods subject to certification must instead bear the UKCA or UKNI mark.
The CE mark may also be affixed, in addition to the UKCA mark and, in this case, the products must meet the requirements of the UK and European Union legislation, the certification procedure must be followed according to UK legislation.
The United Kingdom and the EU (therefore even if the requirements are the same, a single certification is not admissible) and the UKCA marking must, however, be clearly visible and affixed according to the rules.
Operators importing goods into the UK should bear in mind their responsibility for product marking. 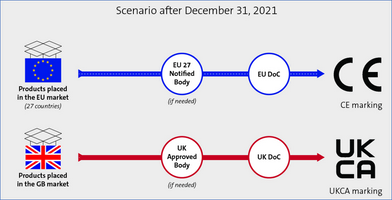 The United Kingdom has replicated a large part of the European legislation on the subject, so products subject to the UKCA marking are almost all products currently subject to the CE marking.
The technical requirements and the procedures for ascertaining conformity are also similar, as are the cases in which self-certification can be used, but there are still differences and so-called "non-harmonized" rules for which operators will have to do the necessary checks according to the type of goods and not to rely on the identity of the requirements with the legislation relating to the CE marking.

UK Notified Bodies are renamed UK Approved Bodies; they have lost the qualification of EU Notified Bodies and, consequently, are no longer recognized for the purpose of EU certification and have left the EU NANDO system to enter the system set up by the British government that collects UKCA certification bodies.
Marking of products circulating in England Wales and Scotland Goods already placed on the market in Great Britain (including Northern Ireland) before 1st January 2021 with the CE mark can continue to circulate until they reach the final consumer or are put into service, as required by Art. 41 of the Withdrawal Agreement which provides that the Union regulations relating to the marketing of goods apply to them.
In this case, there is, therefore, no obligation to withdraw from the market or to make changes.
Pursuant to art. 40 of the Withdrawal Agreement, a good is considered "placed on the market" when it is first made available on the market, that is to say when it is supplied for distribution, consumption or use, that is when, after the manufacturing phase, it is written or verbal agreement (or a contract offer) for the transfer of ownership or other rights of ownership, or for possession, but the physical transfer of the property is not required.

By "commissioning" we mean the first use of the asset by the end-user.
The burden of proof falls on the manufacturer, the importer, or the distributor, and this proof can be provided with any commercial document (such as contracts, invoices, transport documents). For goods placed on the market after 1 January 2021, the United Kingdom still allows, in some cases, circulation with the CE marking, until 31 December 2022.

In general, CE marked goods will be able to circulate in the United Kingdom until 31 December 2021 only if certain conditions relating to the certification are met and/or to the person who carried out the certification (if the CE mark is based on self-declaration, if compliance has been by an EU Notified Body or if, having been assessed by a Notified Body of the United Kingdom it has been transferred to an EU body) and if the prerequisites for CE marking remain unchanged and are the same for UKCA marking; so if the EU were to change the requirements for marking, the goods subject to change will not be able to circulate in the United Kingdom with the CE marking, not even until 31 December 2021.

Northern Ireland
There are different rules for assets circulating in Northern Ireland where reference must be made to the Protocol of Ireland and, in any case, a check must be carried out for each asset in order to identify the relevant regulations.
CE marking will still be required. If the asset is one of those for which certification by a British entity is required, the asset must also bear the UK (NI) marking. Goods destined for the rest of Great Britain will still have to carry the UKCA mark.
The UKCA mark will not be sufficient for the purposes of the circulation of products in Northern Ireland.
The UK (NI) mark that will be affixed when the conformity assessment is carried out by a UK body cannot, however, be affixed without the CE mark.
Conversely, goods with the CE and UKNI mark cannot be placed on the EU market.